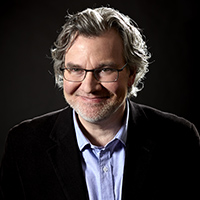 Kelly Leonard is the Executive Director of Insights and Applied Improvisation at The Second City and Second City Works. His book, “Yes, And: Lessons from The Second City” was released to critical acclaim in 2015 by HarperCollins and was praised by Michael Lewis in Vanity Fair who called it “...an excellent guide to the lessons that have bubbled up in Second City’s improv workshops.” Kelly is a popular speaker on the power of improvisation to transform people’s lives. He has presented at The Aspen Ideas Festival, TEDx Broadway, Chicago Ideas Festival, The Stanford Graduate School of Business and for companies such as Coca Cola, Microsoft, Memorial Sloan Kettering and DDB Worldwide. Kelly co-created and co-directs a new initiative with the Center for Decision Research at the Booth School at the University of Chicago, The Second Science Project,  that looks at behavioral science through the lens of improvisation. He also hosts the podcast, “Getting to Yes, And,” for Second City Works and WGN radio that features interviews with thought leaders such as Simon Sinek, Adam Grant, Gretchen Rubin, Dan Pink and Brene Brown.

For over 20 years, Kelly oversaw Second City’s live theatrical divisions where he helped generate original productions with such talent as Tina Fey, Stephen Colbert, Amy Poehler, Seth Meyers, Steve Carell, Keegan Michael Key, Amy Sedaris and others. He lives in Chicago with his wife, Anne
Libera and their children Nick and Nora.

© 2018 Shaken & Stirred. All rights reserved.
The views and opinions expressed by presenters in this program are those of the person presenting and do not necessarily reflect the official policy or position of the sponsor or I/O Shaken & Stirred.